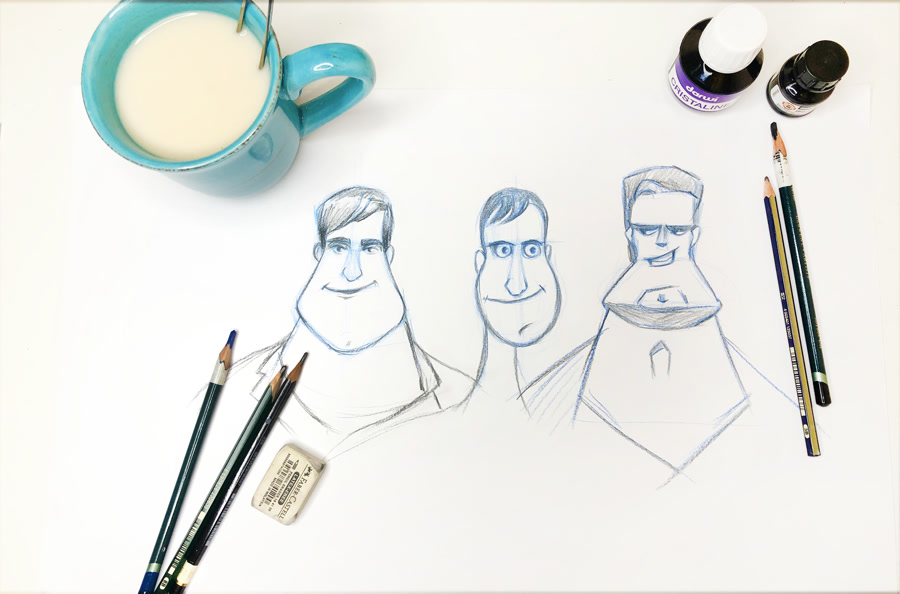 So you have a passion for drawing and design. You´ve decided to take the path to become a character designer. You love everything about it and you are kind of good at drawing people.

Except, you seem to draw the same character over and over again.

Here I´m going to tell you a little secret. The sooner you pay attention to the character´s personality the sooner you´ll become the better character designer you´ve dreamed of. We have a unique gift to look for clues in people´s faces to be able to find out who they are before we even know them. Yes, unconsciously, we judge the book by its cover. But this is not a bad thing. That´s what makes this world interesting - the variety of interesting people. I mean, you don´t want everyone to look like Mr. Andersson from the Matrix, now, do you?

As a character designer, you need to develop the skill to read people´s faces. Kind of like a psychologist do. This will give you such a wide range of different and unique personalities that you can apply to your drawing.

What you need to offer your audience are characters that live and breathe. And the more you investigate who your character is by describing what he or she does, thinks, and dreams of the better equipt you will be to draw him or her in the right manner.

Here are some tips and tricks that you can think about:

What does your character eat for breakfast?

What kind of hopes and dreams did your character have as a kid?

Well, what does have to do with who the character is now, you´d say. Exactly. It has a lot to do with that. Is your character bitter because he or she has abandoned their childhood dreams or are they evolving into the person they admire? This will define your character´s facial expression. People who believe they're on the right path tend to smile more, be happier. This will reflect on your character´s face. Maybe they will have smiling wrinkles around their eyes or they will have grumpy wrinkles around their mouths?

How does your character climb a set of stairs?

Another mundane question but the way you climb a set of stairs shows your energy level. Is your character taking to stairs at the time or is she or he slowly putting both feet on one stair before they go for the next one? This will tell you if he or she is energetic or athletic or tired, grumpy or unhappy. All this will show in your character´s face.

Who does your character call when in need?

Does he or she call his or her mother? A close friend or they call no one? People you turn to when you are in need describe if you are a social, a romantic, or a tough person. This is another thing that will give you clues to how your character´s appearance might be.

Those are some clues you could use when you design your next character.

If you want more goodies on how to design fun and authentic characters, I encourage you to take my course "How to design cartoon Humans" and take a step further into character design.

You're just a step away from learning 1-on-1 with Maria Avramova. Choose time slots that fit your schedule best and book your consultation.