Laurie Anne Gonzalez is an American artist based in Phoenix, Arizona and largely creates modern impressionist paintings inspired by natural landscapes and the human figure using acrylic and watercolor paint.

She was born and raised in Alabama to a family of both professional and hobby artists. Her mom was a professional stationery designer and her grandmother was a successful interior designer. When she was 13 years old her mom gifted her dad paints and paint brushes. Before he could even try them out Laurie Anne had taken his gift for a spin. This moment sparked her life in painting. She began taking art classes all throughout high school and studied painting at Auburn University, as well as, Florence University of the Arts in Italy.

After college she put painting aside for a few years to help her mom run her stationery company which introduced her to the business side of the art world. When the company was sold, she moved to the Washington D.C. area for a year with her husband and began her transition back into painting in a small studio space she rented out near the Pentagon.

Her move to Phoenix in 2014 had a highly impactful influence on her work. Her expectations of the desert were to be bland, bare, and colorless. What she found in the desert was one of the most beautiful, wild, colorful, and inspiring environments that would inspire a large number of her paintings by challenging what she’s known of color, texture, subject matter, and composition.

Laurie Anne began making painting studies and drawings of the vegetation she found in her new environment. While on a personal discipline to create every day for 100 days she began transitioning from paper back to canvas and diving deeper into interpreting her desert environment. She began taking drives to the desert outside of Phoenix to soak in, photograph and explore the vegetation and views. In 2017, Laurie Anne began to fully embrace her need of exploring nature as both a source of inspiration, as well as rest. She and her husband began traveling as much as they could, both in the U.S. and in Europe. She would take large amounts of photos and soak in the environments and personal experiences on these trips to bring back with her into the studio.

While never trying to fit into a certain genre of painting, she embraces what naturally comes out of her hands which has lead to many modern impressionist styled landscape paintings. She found that only creating larger paintings made it too time consuming for her to get out and complete a vision for a painting and she wanted a quicker outlet to satisfy her creative hunger. She began painting large amounts of “tiny landscape” paintings that would further develop her personal painting style and inspire her larger works on canvas.

Laurie Anne continues to travel around the Arizona desert regularly as she has found the change of environments from the South to the Southwest to continue to be a main source of inspiration for her art work.


Courses by this instructor (1) 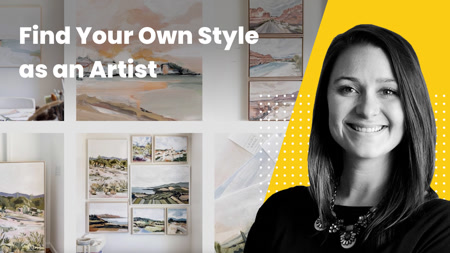